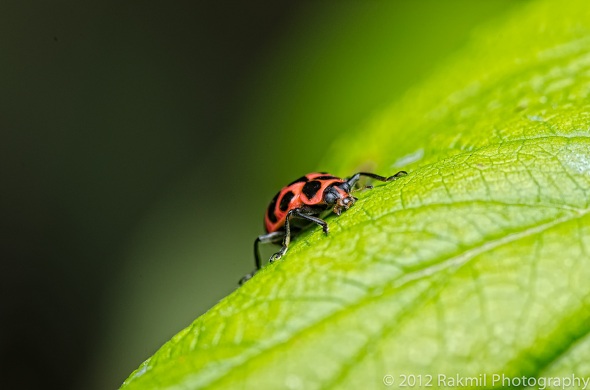 To view more of my photography please click on www.rakmilphotography.com

The title includes a caveat, which is that this is not a universal approach just the one I find successful. There will be three parts to this essay: 1. The Gear; 2. The Technique and other considerations and; 3. The Hard Part.

In the first section I will discuss my approach with my Nikon equipment (although brand or type of camera is not an issue). The second section deals with the technicalities of macro photography and how to beat them into submission. Finally I will talk about the hard part.

First let me spell out my objective with respect to my macro work; I aim for a sharp photograph of an insect or other animal in a natural environment, totally free from the hand of man in an interesting pose or position. I am not an entomologist and the necessity to get photographs that help identify the insect is not part of the objective, nor is it to scare people with photographs of menacing animals.

Secondly I want to make it clear that great macro work has been done with point and shoots and without much of the equipment mentioned below. I am just going through what works for me. If I had invested in Canon I would have an Mp 65-e lens, an all-manual lens, and probably the best macro lens ever made. 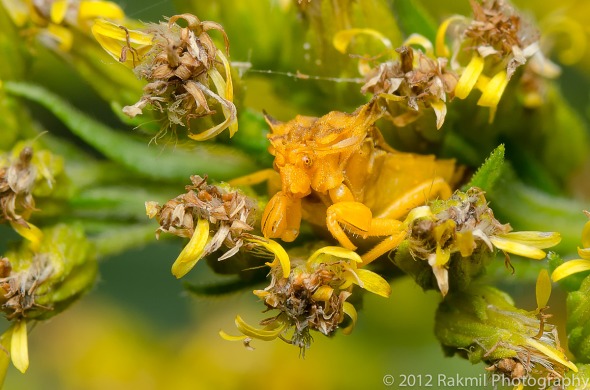 I use a Nikon D7100: it has several things that make it ideal for macro. The APC sensor means deeper depth of field than a full frame camera and the ability to crop further in camera from 24 megapixels to 14 megapixels an added bonus. Megapixels are crucial as significant cropping is almost always necessary with macro. The D7100 allows back focusing and its auto-focus system with my macro lenses is exceptional. I seldom shoot in manual focus. The light meter and the auto-white balance work really well.  It permits back button focusing, where you can divorce the autofocus from the shutter button and focus without pressing halfway down on the shutter. Its continuous auto-focus function is superlative. I like single shot over burst shooting best as it gives me control not the camera. I also use a wired remote control for the shutter when the camera is on a tripod.

I use 105mm Nikon lenses. The D version has an aperture ring perfect for reversing (see below) and for bellows where manual exposure by altering the aperture on the lens is necessary. Choice of a macro lens is important; the longer the lens the more working distance there is between you and your subject. If you go lower than 105mm, you may have to get too close to an insect to get the kind of pictures I take. Yes, I would like a Nikon 200mm F4 macro lens, but they are very expensive.

Reversing lenses on the camera or back to back with another lens can give you incredible possibilities in magnification. The wider the lens reversed (e.g. 20mm) the greater the magnification and the less the working distance (that is the distance between you and your subject).

While I prefer to handhold my shots (ISO 400 helps me maintain a high shutter speed) there are times when support is needed. I use arca-swiss quick release plates from Markins, Ball Heads from Markins on a Gitzo traveller or Gitzo 2541 tripod. Buy a cheaply built tripod and you will end up buying many more over time, you get what you pay for. Many makers today make great tripods, and Gitzo, while superb may be overkill. I have a Wimberley Plamp, a plamp is an arm that attaches to your tripod and helps hold a plant steady for example, or it can hold a diffuser or reflector to help light your subject, it has a claw at one end and clamp at the other. The plamp is not used often but when the wind kicks up it is essential.

I am not alone in wishing we could shoot everything in natural light. I have two systems I use. The first is an Sb-900 on the camera inside a Lastolite softbox. The softbox is 8 by 8 inches and is double diffused.  I can and do stuff more diffusing material like silk into it when I know more diffusion is needed. This is my regular gear, and I sometimes use a Wimberley macro arm to put the flash off camera. I had a long discussion with Wimberley to find out if the arm would be long enough to hold my Lastolite softbox off camera, and it is, just a bit unwieldy. Secondly, I also have Nikon’s specialized macro flash, the R1C1 and have designed my own diffuser for it built around some Gary Fong diffusers. This gear is more for forensics and entomology than common photography, however it has its uses.

I swear by Kenko extension tubes. These move your lens away from the focal field allowing you to focus closer than 1:1 (in other words larger than life). Kenkos permit full AF and metering, unlike the Nikon tubes. I seldom use all three of the tubes that come in the kit, I use one or two at a time. After some experimentation the only diopter (close up filter) I can recommend is the Raynor/Raynox 250. Most diopters kill your image quality. I also use a focusing rail by Kirk Enterprises, it helps stabilize the camera on a tripod and helps with focusing with extension tubes. With tubes you can no longer shoot at infinity and you are restricted to a narrow field of focus; a focusing rail can help move the camera within that narrow field. I purchased some bellows, (extension tubes on steroids) but have not had the opportunity to use them, as I would wish. I would argue that for most people bellows are a step too far.

I strongly advise anyone interested in macro to look at the tutorials on Cambridge in Colour, they explain the math and have calculators you can use. Basically the closer you get the narrower the depth of field for any given F stop. In other words at 1:1 f11 gives you millimeters of focus depth. Another phenomenon is that even on a bright day there is less light than one would like. Thirdly, at 1:1 any movement is magnified and ruins your efforts.

While macro is normally defined as 1:1 (life size), I almost never shoot at that level of magnification. At 1:1 it is very hard to include context in nature and my goal is to show a beautiful creature in its habitat. I want my audience to know what I am shooting and something about where I am shooting. So maybe calling this macro photography is a bit misleading, but some of the subjects I take are only millimeters long.

I try get as much working distance between me and my subject that I can while ensuring I have detail,; in practice this means the difference between less than an inch and six inches and in post processing I crop. I shoot anywhere between F11 and F16 and do not expect everything to be in focus (e.g. the face is in focus but not the back of the insect).

When the light is poor I use flash and I worry a great deal about the diffusion of that light, so that it looks natural and that there are as few highlights as possible created by the flash. Starting at 1/250th of a second I figure out what shutter speed will work best, usually I try to go much lower in my speed and bring in ambient light. Flash used properly can freeze motion but it is sometimes a trade-off between freezing motion and realistic light. To avoid this, and to ensure that I have as little light fall-off as possible I may use two flashes, one for the subject and another for the background (at which point bystanders gape at my set up).

That said 1/250th is a good place to start. I do a lot of testing of my flash in the field before I see my first insect, just to make sure I remember what to do and accommodate the light, as it exists at that moment in time. If I go under cover of trees I will test all over again. The human eye makes for a lousy light meter as it compensates and fools you into thinking the light has not changed.

Now that you know most of my secret formula, let us move on to the really important bit, the hard part. 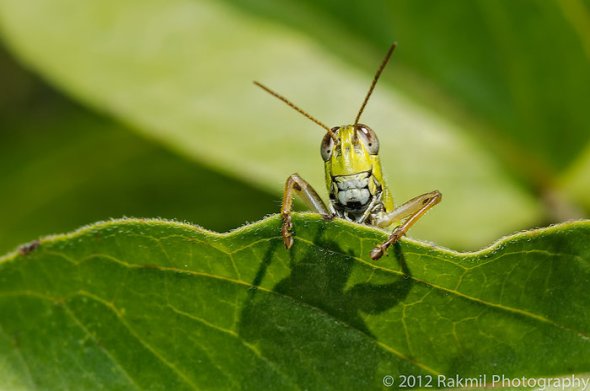 The hard part consists of finding a subject, manhandling the light, ensuring a Zen-like instant where nothing in the universe moves and getting the focusing point on that part of your subject that matters. This is precisely why all of the gear you have is meaningless if these three things do not happen. There is nothing to process or show if there is no subject or if the subject is blurry or out of focus. The more complex your gear, the harder it is to balance all of it and get a good result. Come winter there are few if any insects to photograph outside and in the spring I have to learn to work with my gear all over again. The advantage of more advanced gear comes with your mastery of it.

Lots of people catch insects and then shoot them. This is not something I do or want to do. Captured insects lend themselves to techniques like focus stacking –where you take a succession of shots at different focal points and combine them in post processing so that everything is sharp regardless of the fstop you used. I would like to try it, but it could get awkward in the field.

The best place to find subjects is in transition areas, e.g. shorelines, edges along a forest. It is even better if you can find out what plant a specific insect likes. However, you can visit miles of goldenrod and miss every ambush bug (they, like most insects, are camouflaged for a reason).

Your greatest enemy is the wind, even a soft breeze can be hellishly annoying. There are plans on-line on how to build windbreaks, really good for flowers, less useful for animals that are on the move. If you have a friend or patient spouse they can hold steady a branch you are focused on. However, once they discover that they were holding still a bush in which there was an insect whose bite is one of the most painful in nature they are likely to be very wary the next time you ask for help!

So here is a huge unbelievable tip. Wide-angle lenses, including kit lenses tend to be able to focus closer than other lenses; you can get very close to something and still be in focus and use all of your resolution. It might be a good place to start. Use this tip to take macro pictures of still life objects, like flowers, before venturing into taking pictures of moving animals. If it works for you, you could get a cheap adapter and reverse the lens on your camera if that lens has an aperture ring (see above). If you succeed with a still life, with or without flash and with or without a tripod then maybe you want to go further.

Good luck I hope you find this helpful.

This site uses Akismet to reduce spam. Learn how your comment data is processed.

© Victor Rakmil 2010-2019. Unauthorized use and/or duplication of this material without express and written permission from this blog’s author and owner is strictly prohibited. Excerpts and links may be used, provided that full and clear credit is given to Victor Rakmil and Rakmil Photography with appropriate and specific direction to the original content.

My Books For Purchase

What Did You Expect, Dogs Playing Poker?

Trade Paperback for sale in Ottawa, Ontario at: